On occasion I find myself in a group of strangers for my work with the odd sensation that it is a group of unusual people. They are outside my experience by default as new people, but for some reason there are these groupings where everyone is in eccentric or misfit category. This doesn't bother me and I find these people are more endearing for their eccentricities. And really it's all relative, isn't it? Who gets to judge eccentric or misfit? But you know what I'm saying when you meet these people. I know I've also had the feeling in other circles of being the misfit in the room.

But I had the sudden thought that we are all misfits. None of us can attain a level of perfection or acclimation that will make us acceptable to everyone else on the planet. Much less can we manage ourselves into a state of acceptability to God. In the eternal economy we are all misfits, none of us gets to go across that line of acceptance or goodness based on our own work on our personalities.

What a joy I took in bowing, figuratively, to God  on the same side of the line as the misfits or challenging people (in my limited view). I can't propel myself across the line. It's a freeing idea really. Hopefully it helps me to feel more generous to the people I find different from me recognizing that we all need God's hand to reach across the line and erase the selfishness of myself.
Posted by roamingwriter at 3:09 PM 1 comment:

Email ThisBlogThis!Share to TwitterShare to FacebookShare to Pinterest
Labels: 28 of 52 for 2010, crowds, culture, life in the USA, spiritual

The roar of summer

After nearly 5 years, I am living through a midwestern summer again. The sound of the cicadas here is deafening this August. It's probably been this way my whole life but after being away the sound is incredible.

For those of you who have not experienced in cicadas, they are one strange bug. As a kid, we called them locust, I don't know why and I don't think that's related. They make a distinctive roaring all through the day and night during August more or less. 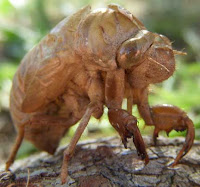 As a kid I mostly knew the crunchy exoskeleton thing that the cicadas hatch out of to their winged noisy selves. The funny shells they leave behind on tree trunks and fences. They are exceedingly satisfying to crunch under your shoe (they're empty).

I've never, ever seen the cicada inside the shell only in their fully winged rattly buggy noisy existence. They seem to rattle if you find one on the ground and poke at it. If you get 1,000 of them in a tree outside your bedroom window (I don't know the numbers, but it sounds like a lot), you almost need earplugs to sleep.

There's an area in the south of France called Provence, a major tourist destination, full of lavender by summer and villages that squeeze the cute out of you. They have turned the noisy cicada into their mascot and sell lovely little ceramic versions of it in every village and shop. Kansas and Missouri don't seem to have gotten around to making our cicadas a tourist attraction - yet.
Posted by roamingwriter at 9:42 PM 3 comments:

A day in the life

Backstory: For six months, I worked on contacting our broadcast partners and others who had been interested in doing one of our Bible stories video projects in another language to arrange a foreign language shoot for the Go Borderless event. After many disappointments and what seemed to be spiritual opposition, I discovered that two guys were coming from Bangladesh to the Go Borderless 10 day training event. We exchanged the script and started planning for them to stay an extra week for the editing process etc. I was so relieved to finally have something locked down and something that would touch so many lives. I was to direct the shoot so I had been out scouting locations, the direction of the sun at various times of day, etc. We would take half the team and shoot half of the man on cameras segments one day and the following day finish them with the other half of the team. Everyone would experience a field shoot and at the same time we'd have another product done in another language. So finally it was all coming together.

Then two weeks before the shoot, we got word that the Spanish embassy had denied the Bengali men's visas to attend Go Borderless. We sent appeals called, faxed. The embassy wouldn't budget. Now with only two weeks to go I was starting over.

The first thing I was sure about was it had to be someone local - we couldn't ask anyone to fly in at the last minute. So I called one of the Christian production houses that also does a drug rehab ministry that is based in Spain. In my unpretty Spanish and his bumpy English, Dani and I talked. He did have someone who could do the man on camera parts. He was busy that day and said send him an email. I had our resident organizer, Spanish speaker, and lawyer - Silvia verify with him. Yes, yes, everything was fine, but he was always too busy to talk it through.

The day of the shoot: I'm organizing the team of Go Borderless volunteers, the equipment is getting loaded in the Speed the Light van for transport to an old village nearby. A man named Javi shows up dressed in jeans and a t-shirt. I start putting make up on him in preparation to go to our location. We are talking, in Spanish, I'm explaining what the day will involve. He thinks it's weird I'm putting make up on him. I try to say we always do this for talent. After we get him done, he is on the phone. I thought he was dressed casually but Dani would be using this for broadcast so I assumed he sent Javi with the casual look on purpose. Javi has told me he is usually a camera man.

We load up and get ready to leave and Javi is still on the phone. We get there and start setting up the equipment on our first of four locations for the day. We are ready to start shooting and I finally understand Javi. He is not a talent/on camera person. He has been on the phone trying to get his boss to send out David who usually does this kind of thing. No wonder Javi thought it was weird I was putting makeup on a camera man.

But we need to start shooting. We are all set up, on location, ready. So I make Javi do the first take. I don't know if David is going to show up ever much less now. After one take, we have to reset some lights and teleprompter things and a car screeches up near us. A man, David, in a suit jumps out. This is the guy. Somewhere we miscommunicated with Dani or he did with someone else. So I'm in the middle of the street in this village putting make up on David (Thankfully, we'd brought it with us!)

David was very good at the man on camera talent and the shoot went really well. Until location #3. A week previously I'd checked this location. Silvia had filed a permit with the town to shoot. Suddenly, the day we need to shoot, they are loudly putting metal scaffolding up in front of the old cathedral. I adjust the shoot plan and we squeeze a shot in that doesn't include scaffolding. AND we do it while the scaffolding men are at lunch - or we would have had no audio whatsoever.

It was a crazy day. I've never had talent change midstream like this. The Spanish version of Path of Jesus was completed and used by the local broadcaster here in Spain who also has stations in South America. In addition, it is being shared with Assemblies of God churches in Spain and that is just the beginning.
Posted by roamingwriter at 12:09 PM 1 comment:

Email ThisBlogThis!Share to TwitterShare to FacebookShare to Pinterest
Labels: 26 of 52 for 2010, IMM, life in Spain, missionaries, perseverance, video, work

So yesterday was an election day and today I read an American Spectator article that emphasized the dichotomy of our country in the political arena. The odd thing is I feel like I'm watching the same thing occuring in the church (in general not one church).

Each side of the equation (political and church) call each other wrong. The Christians can go so far as to say sin and evil. Politicians call each other liars. This has been a sad part of society for me to realize since I've been back in the USA. It may have always been there and for some reason my absence and return brought it to the forefront.

But within the church I had a strange and I'm sure completely unrealistic thought. What would our conflicts look like if we were ruled by the fruit of the Holy Spirit when we dealt with one another and the issues. What if love, joy, peace, patience, self control, kindness, goodness, gentleness, and faithfulness were our watch words in dealing with how others want to do church. I know many of the arguers would say no -- they are being faithful because it is WRONG. But, the situation could still be handled with love, joy and peace surely? Alas, no, it seems not. And this makes me sad.
Posted by roamingwriter at 9:41 PM 3 comments: