I was ready to leave this morning in a long flow-y sweater that I had to take off to clean up diarrhea from the attic floor. Sigh. Mini-Moo-Mora couldn't hold the special treat of some meat we gave her last night.

About six weeks ago, we got talked into being foster dog care givers. A lady in our Spanish village had watched our dog to raise funds for the rescue society here. Yolanda then started talking to us about foster caring a small dog in the rescue system. I guess Yolanda usually takes in the large dogs and this little one really needed to be somewhere else.

Since we had a little dog and they had gotten along while at Yolanda's house, she thought it was a good fit. Enter into our lives: Mini. 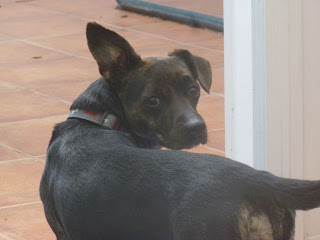 Mini had been found on the street abandoned, pregnant, malnourished and full of bugs. She had been restored to health and is seeking a home. When I went to the ASCAN facebook page and website I saw no record of Mini. Turns out in her original home she was Mora (blackberry) Thus we dubbed her Mini (as in miniature) - Mora.

I noticed some little cream cups I had displayed the name brand: Mini-Moo, so her name continues to mutate. Mini-Moo-Mora. Moocher would not be a bad one to add to that either. She's perpetually hungry after her street life.

She has anxiety about being separated from us and we spent several weeks having rather fussy bedtimes which we have now resolved. It involves a game of hide and seek with some dog food that occurs after we turn out the lights and shut the door.

Mini also had issues with not wanting to go to the bathroom in our "yard/garden" which has no grass. Mini needs grass to do her business. So despite being house broken when she came to us, we've passed a few weeks in confusion about where is a good place to go. We had it conquered until the diarrhea set back this morning, but she's definitely getting the hang of it.

So we've met several people in the village, when we've been on walks, who were part of Mini's rescue. They all love her - you can't not love her because she is so loyal to anyone who is kind to her after her abandonment. They all warn us about being cautious about finding a home for her. Apparently there is a lot of dumping dogs that goes on here still and that the police don't really do much about it.

After all the warnings, we are nervous about finding her a home.

Mini joins Dulcinea who is our Spanish pound adoptee dog that we've had for six years and is a joy for us, but we never imagined being a two dog household. Oh dear. Not sure where this is going. Anyone want a super loyal dog? We think she's part pit bull and part dachsund because she's as stout and compact as they come. 8.5 kilos of tough muscly love! 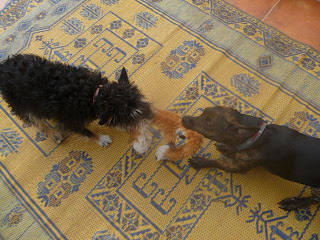 Dulcinea on the left, puffy in a winter coat, black and delicate, Mini on the right, all muscle and she lets Dulcinea win.

Posted by roamingwriter at 2:16 PM No comments:

Reading ratings. How many stars?

I like to read. In recent years I've taken to trying to share that with others on Good Reads and some on Amazon. I'm not real active but it's fun to share and look for new books. I started tracking what books I read each year about four years ago, but last year I started rating them for myself on my list as well as trying to rate them on Good Reads.

After some time of doing this, I noticed that my rating system seems to be quite different than other people's ratings. I think I may be quite stingy with stars but that's not how it feels in my head. I'm curious how other people view their own rating system.

For me a three star *** rating, is a basic average book. I enjoyed it but there was nothing that blew me away. Four stars **** I reserve for a book I really enjoyed or found the writing really exceptional or perhaps the plot and suspense were really good for me. I know that is really subjective and even is influenced by my mood.

For example, I rarely feel in the mood for a historical book, but I often read them and quite enjoy them, but that's seems not to be my first choice. Though when I had access to bookstores, I did find myself picking one up after browsing around in the mystery section. One I'm interested in getting at the moment is based on Charlotte Bronte as a main character. I love the real Bronte's writing, so it would be fun to learn more about her through some fiction.

Back to the stars -- a five star ***** rating is reserved for my favorite books of all time. So this is a rare thing for me to give out. A precious gold sort of thing. You'll find few in my Good Reads pages. Sometimes they only go to a book I read a long long time ago that has never left me.

Two stars ** or one * are very rare as well. I feel bad to give them because to me they are not so good. Two** is a book that I did enjoy some but was poorly written or too predictable and one star * I wonder why I bothered to finish.

I did in the last year or so take up quitting books. In the past I never did, but if I'm not into it or it's too easy to see where it's going and not cleverly written, well, I move on. It's a new enough idea, I still feel somewhat guilty about it, but I've given myself permission. I do not rate books that I do not complete.

When my first book came out and started getting ratings on Amazon, I was delighted by several five star ***** ratings by complete strangers I might add, not my best friends. (Killed in Kruger)  But stars are free and some people aren't stingy like me. I noticed also on Amazon one of my three star *** ratings was a bit negative and in my head three isn't bad.

I also saw on Good Reads someone give a one star to a book saying it was worth the read but wasn't a great book, which is totally different than my version of a one star.

So I ask myself if they are free why am I so tight with my stars? I know I will take a recommendation from someone who merely liked a book or enjoyed it. They do not have to say it is a new favorite or anything to convince me. I also feel self conscious about recommending things to people. I want to know I liked it before I can recommend or that a trusted friend or resource recommends it if I haven't personally read it. A lot of marketing sites all the authors promise to recommend each other's books, but I feel I have to read them first.

What is your system of stars? Or do you have a different way of rating books? All these online networking sites mostly give us stars as our way to rate. I wonder if I should change my ways, but then that doesn't seem fair to all the books I already rated!
Posted by roamingwriter at 6:13 AM No comments: