Below are the three candidates for my book cover for Killed in Kruger. You can vote by commenting here or by going to my facebook page. The one with the most votes will be my cover and a Want to help me pick a book cover?

A few who choose the winner will win a free book. Good luck! 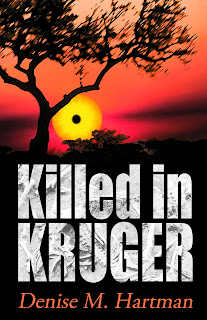 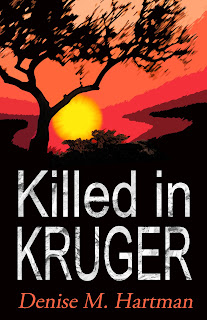 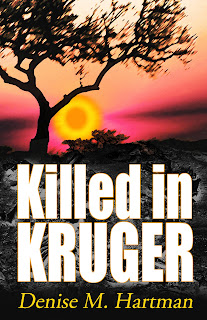 Posted by roamingwriter at 3:01 PM 7 comments:

Today I had to take the train and the metro to get to the doctor's office. It was one of those May days that dips back into early chilly spring instead of bordering on summer. I wore a long full skirt thinking it would be warm, then needed a rain jacket. The overall effect I'm afraid might have been slightly bag lady what with my hair flying out of the clip with the help of the wind. Or worse yet, slightly square, spongebob-ish.

But it was an oddly delightful reading expedition. I should preface it by saying I've read a lot of books this year that were underwhelming. In a sort of vague dissatisfaction, I picked up a REAL book that my mom had recommended. It's from 1954 and I'd barely gotten started in it before today. It's written first person and has a growing sense of disquiet and building suspense.

Despite needing to go to the doctor, I was looking forward to the train ride. It's about 35 minutes and felt like it was only a few minutes today. I was so immersed in my book, I just looked up and suddenly we were at the main station.

I tucked my book back in my oversize bag and headed for the Metro. My two tickets were both expired and I had to spring for another pass. In one of those lovely synchronicity moments, I got the ticket, swiped through the gates and made a train as the beeps were sounding to close the doors. Amazingly, there was a seat. Out came my book. I enjoyed the lightness of it. My ipad while I enjoy reading on it, traveling from train to train and trying to continue to read is unwieldy and requires two hands, partly because of a built in keyboard in the cover.

I nearly missed my station where I needed to switch trains I was so into my book. I did that weird thing where I stood up thinking it was too late. I hesitated a moment longer and suddenly flung myself off the train at the ultimate moment. While it made my heart race, there was something satisfying to having made it. Maybe a hint spy like. I simply held my book in my hand and found my next platform.

I got a seat on the next train - just as amazing. This time I was a little paranoid about missing my stop. I'd made up my mind to go to the more distant metro stop and find my way to the doctor's office from a new direction. I get a kick out of figuring out new neighborhoods. I glanced up from reading and noticed a familiar name so I got off the train. It was my normal stop for the doctor's office! I guess I just couldn't keep my concentration with the book and the stops. When I have my ipad on the train, I'm always consumed with getting it back in my bag safely before I transfer stations.

I was early so I ducked into a Starbucks and got a caramel steamer and sat in a sunny spot reading and watching the ritzy families go by with the children all in their private school uniforms and doggies(fox wire hairs, poodles, and tiny french bulldogs) who'd gone to pick up the kids from school too.

Then I went to the doctor's office and had to wait (yeah! more read time!). Apparently it was urology hour for one of the other docs because I was surrounded by dapper old Spanish gentlemen. During this part of my book an apparent stalker starts surfacing -- with a trademark whistling. Someone in the hall outside the doctor's office started whistling. It was a huge thrill to have my book coming to life around me.

I sat my beverage on the doctor's desk as we talked. Yeah, he told me no dairy. I didn't volunteer what was in my cup but he asked eventually. Busted. Blah, blah, blah, And I'm on my way to the train again. A man asks me in Spanish where the Metro is and I'm able to understand AND tell him where. Cool.

I saw a tiny, tiny grandma walking a grandaughter home from school on my way back to the Metro. The little grandaughter - obviously gradeschool, maybe 3rd grade was up past nana's shoulder. I got a seat and read on the way back to the big train station. Saw a nun eating a pastry in the station. The train was super crowded. I was in the awkward position of center entry way with no polls to hold onto. So I surfed and read -- I would never try that with my ipad. After two stops, I got a seat in the doorway. The sunlight slanted across my book and it was good.
Posted by roamingwriter at 2:21 PM 1 comment:

I was driving recently with the wind pouring in the window and a song I remembered from childhood came on the radio so I cranked it up. This is one of my favorite things to do. Drive windows down, destroying any hair alignment I might have made that day, and loud music. Love it!

I noticed that song I was listening to from the 70s, a Bee Gees tune I think, sounded pretty good and had some parts I'd never noticed before. How is that possible? Songs like these have been on the radio in my hearing more times than I can count, so how I can I notice a new part?

When I was a kid my parents listened to the radio, but generally at a staid normal volume. I do remember a few times riding with my dad when he would crank it up on a song or two he really liked and sometimes when he pulled in the drive way after work he'd be jamming to something, but in general it was always civilized volumes. I obviously take after my dad in this department with my tendency to want to crank the tunes.

Also I had a bedside radio but didn't dare crank it up for fear of having the radio taken away as punishment when I was young. As a teenager, I'd push the volume up when no one was home and enjoy myself, but there are a lot of songs I have never heard loud.

As an adult, I've lived all but seven years in multi-family dwellings where being a kind and self conscious family we keep the volume pretty minimal trying not to bother others. This is my husband's doing as I'd probably forget and crank it unknowingly if someone didn't help me pay attention.  So really and truly the car is the one place I rock out and then only when I'm on my own normally. Ahh, guilty pleasures. I've discovered the ipod is a great opportunity to crank the volume without bothering others, but I have a fear of singing along and looking ridiculous which open car windows and racing wind help me overcome.

The other interesting thing about volume is what I'm experiencing living in Spain at the moment. We are tightly packed in living conditions where I am and yet there is no self consciousness about volume. I wonder if they've all grown up sandwiched together so if you want to sing loud, or practice an instrument, or have the radio on the patio -- well that's as good a place as any. And if there's a party -- watch out -- they will indeed crank up the volume until the wee hours.
Posted by roamingwriter at 5:04 AM 1 comment: