Time off: See it all or relax?

What is your vacation or holiday philosophy? I've always been a see it all girl, use every minute of my vacation for going places, doing stuff, and seeing sites. I can't help it. I take after my father -- if there's a spare 30 minutes there must be something we can do or eat to take our vacation to the max. However, I married into more laid back stock. My man likes to travel but he being the introvert needs a bit more recovery or rest time in his time off.

The last year at my day job has required a lot more of me and I've had to travel for work several times too which is just mostly work and hotel rooms, not at all in the fun category I like to achieve on my own personal travels. If it goes really well, sometimes a work trip will have one afternoon of fun or site seeing.

I did a six week video shoot for my day job September and part of October, so knowing we would be wiped out afterwards I booked a vacation for immediately after this intense time to recover and relax. I've never really planned a relax trip.

We booked a Villa in Portugal thru a Groupon. (The jury is still out on whether I can recommend travel with Groupon offers. I've done two and I remain neutral. Neither overwhelmed by awesomeness nor repelled.)

A few things made this vacation more relaxing than any other I've done. One: we stayed in one place the entire time. Two: the villa was a separate house that didn't have cleaning service, so we could sleep in silence to our heart's content. Not something you can do in most hotels. Three: it rained several days which made us less inclined to try to see the whole of the Algarve area where we were staying in Portugal.

If and when I need another relaxing trip, I would definitely consider renting a place (apartment, house, whatever) because you really could lounge around in your pajamas. At the same time, I would make sure there was carry out food or delivery available so that we don't end up with the stress of trying to grocery shop and set up house the entire time. We had a food delivery option from the villa people which made it just right.

We did make it out a couple of days between rain showers to do a few site seeing things which rounded out the trip nicely, so we felt we'd seen the area to a certain extent and hadn't missed out.

This has opened up a whole new way of thinking for me, since my travel before had always been about seeing it all and doing it all. The idea of choosing to go away to relax has not come natural to me. I think I will deinitely do it again sometime though not for all my holidays. I might pick a place that doesn't have a lot of sites so I don't have any psychological pressure from my get out and see it side to conquer the region.

I used to think I'd never do an all inclusive resort type thing because that's not my style (nor my checkbook!) but I perhaps begin to see the appeal of being taken care of on vacation.

Which kind of travel do you prefer? See it all or lay back and relax? Turns out I like them both, depending on my energy level, but it took 40 odd years or so to find out.
Posted by roamingwriter at 6:13 AM 1 comment:

If you've got a longing to write, check out my guest blog on raising the tension in your writing.


Sheila Boneham's Blog: Writing on Wednesday Guest Denise Hartman on Raisi...: My guest today is mystery author Denise Hartman, who helps us raise the tension -- useful in many types of writing, not just mysteries a...
Posted by roamingwriter at 3:29 PM No comments:

A compelling exploration of consciousness

A while ago I blogged about finding books. This is an off shoot of that discussion. I'm traveling again and I thought I'd look for a book set in Portugal. I still don't have a great way of finding books, but I started trolling through a Good Reads list.

The title of this blog was a phrase in a review, a glowing review I might add. For me, this phrase tells me it's probably not what I'm looking for at the moment. I don't want to explore anyone's consciousness -- I've got plenty of work with my own, thanks.

I generally avoid overly popular books unless someone I know I share reading interests tells me it's worth the journey.

It doesn't seem quite fair that I complain about not finding books I enjoy and yet don't want to read the "experiemental and unique" or highly literary. Those are phrases that make feel the ponderous emotional baggage of the book before I open the cover.

I totally get that this is a category of highly acclaimed books that many, many people enjoy. It's just generally not for me.

In a similar way, the phrase love triangle, undying, unbounding, forsaken, forbidden, or any other adjective followed by the word love, isn't in my scope right now either. I had a phase of that and for the moment and as far as I can tell I've left it behind.

So do you have certain catch phrases or descriptors that as soon as you see them you know a book is or is not for you? Am I guilty of stereotyping?

I attended a conference in Switzerland and at first had no intention of blogging about it because really when you go to these conferences you mostly see the inside of a hotel, right? In the end, I had a few interesting observations that I thought I would share.

The first piece of advice I'm going to give is: learn how to pronounce your destination before you leave home. I was in the throes of video production and left home in rather a frenzy. I had no idea how to pronounce the town I was trying to find.

I made eye contact in customs with the thought of asking where the train station was located. Bad idea. Never make eye contact in customs. I looked away thinking this wasn't the place to ask and for my courtesy I got to have my undies inspected. It was all very fast and efficient, but part of the challenge was trying to say where I was going. He couldn't understand me and I had no idea how to pronounce it which made me suspect.

I made it out of customs and was struck that everyone in Zurich airport seemed to be speaking French, so I incorrectly came to the conclusion that French dominated. In Switzerland, they have four official languages: German, French, Italian, and Rumantch (or Romanch). I did hear the cleaning guys in the train station in Zurich all laughing and carrying on in Italian. I think I heard Rumantch on the bus. Not sure what I'd liken it to - something with a touch of Slavic influence but still a romance sounding language.

After the brown and dry summer of Madrid, I found the lush greenness of Switzerland soothing if somewhat chilly.  It was the second day before the clouds lifted enough to realize there was a mountain range of serious mountains tucked between the two grand hills by the lake I could see from my hotel room. 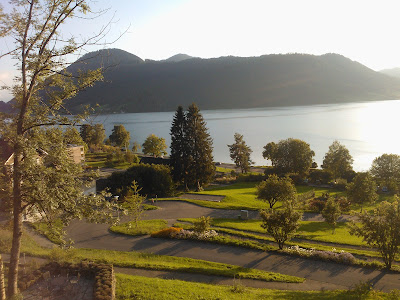 Once in the German speaking section of Switzerland, there was no longer a whisper of another language. Our conference was at a convalescence/retreat/convent type place, but it was protestant and the nuns had rather a Mennonite look and spoke only German. As you can imagine, this was not the main tourist area and not everyone spoke English like in the city. No English signs or helpful hints in the hotel. Luckily there were no fire drills, so I didn't have to try to understand the instructions.

One elderly lady from the convalescence center decided to find out what our group was about and cornered someone by the water cooler/wifi nook. She seemed disappointed that we were a film making group. She'd made up her mind that we were a psychology group.

I ducked out of a session when the sun came out to sit for a minute on the terrace overlooking the lake. A large convalescing lady with canes came and sat with me and her husband proceeded to bring chairs and place them all around.  (Them: Something German. Me: Smile and nod.) Eventually a  family reunion took place and I decided to skedaddle.

After Madrid, I had the impression that everything was very orderly and efficient. Not trying to take up the Swiss stereotypes but they are apparently stereotypes for a reason. We were to check off our choices for dinner and lunch at breakfast and the wait staff didn't speak English so at times you just decided it was easier to take what they offered than to explain.

I thought perhaps it was just me but one of the British members of the conference commented that it all seemed very clean and orderly. When we were catching the train back to the airport (after two buses to get to the train), we were sort of watching to see if it left on time due to Swiss efficiency. The train left two minutes late. Our droll Romanian companion from the conference proclaimed, "We must make a report of this," and we all died laughing.

The conference did have an outing to a nearby park area on top of one of the mountains and I saw Swiss cows and heard their cowbells!


We also had a bit of Alphorn playing our last night (a la Riccola commercial) which was interesting to see. I'm not making this up: one of the Alphorn players was named Heidi. I was trying to see it as a cultural moment but several of my companions were getting tickled. The Alphorn players said they'd play a really different song later, but despite having a wide tonal range they only had so many actual notes. (I'm not musical so excuse that description.) The songs started to sound similar at which point the chuckling became hard to hold in. It was a lovely taste of Switzerland, even if mostly from buses, trains, and hotels.