We drove about five and half hours north into the state/province of Galicia, still Spain but they have their own language too. The area is known for being rainy, like BB's northwest, and for seafood and for the pilgrimage of Santiago de Compostela. We lucked out and had sun and very pleasant weather minus one loud but pretty dry thunderstorm. Dar enjoyed the loud, midwest style thunder.

Because it's rainy up there it was very green and many of the ancient buildings had moss growing on them. It is such a different look than the dry, dusty area we live in that we really feasted on the green. 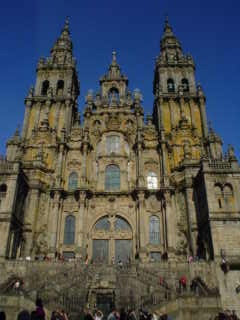 The church of Santiago. 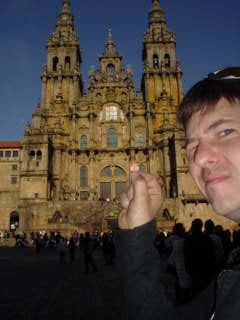 The church is the image on the one cent coin here.

We feasted on the seafood too. They are known for pulpo de gallega, which is octopus Galician style. They cut the tentacles into round medallions and saute them in butter, garlic, and paprika. Pretty taste really if you can get past the suction cups. The skin (and thus the suction cups) are fatty, so I don't always eat the skin. The inside is meaty, white, like a scallop. They throw a few small tentacles on the plate too. We let Dar eat those. We also ate sardines, shrimp, and fish. 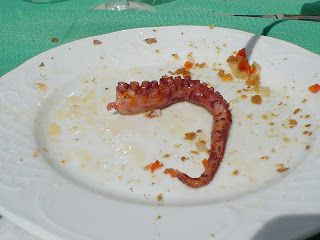 Santiago de Compostela is the town we stayed in and the main attraction up there. The story is that James (as in St. James of the Bible) came and ministered in Spain for 10 years. For some reason he went back to Jerusalem and got himself killed. His disciples brought his body back to Spain to bury. In 800 and something AD, a monk followed a course of stars and discovered the remains of St. James. Thus the city is named St. James of the star course. Then people all over Europe for a thousand plus years walked the Camino del Santiago. Mostly it is from Paris to Northern Spain. The pilgrims arrive all day long and look weary but relaxed. Several limped. Today it seems like most people go from the border of Spain and take about one month to walk it. You have to walk 100 kilometers (62 miles +) to be a certified pilgrim of St. James. We didn't walk it but I am fascinated by the idea of stepping out of life, unplugged if you will, for a period of time like that. 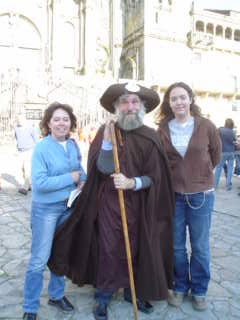 Me and Tiff with an old geezer wearing old fashioned pilgrim wear (for photos), a bit cheesy but he did say he walks it every year.

We drove a little of the coast on the way home and then headed for a very long drive home. Turns out there was a 100 kilometer traffic jam that added a couple hours to an already long drive. 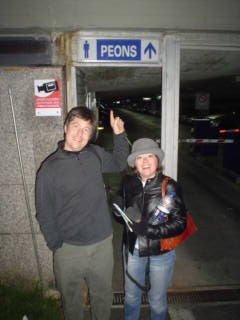 Posted by roamingwriter at 2:27 PM