I'm not an avid pinner. I have a few boards. One is for characters in my books, one is for books I like. One I called "Food I Will Likely Never Make" because I'm a big one for looking but not actually doing -- as I suspect a lot of pinterest is.

The food page is where I made my self discovery. I opened the board for the first time looking for something I thought I'd put there that maybe I would consider making depending on the ingredients. What I discovered is that I am obsessed by the same basic foods.

I have pinned several versions of macaroni and cheese. I know, what am I 12?! Oh comfort food, I love you.

I pin a lot of enchilada related things. Enchilada soup, avocado enchiladas, chicken for enchiladas in the crockpot. If I go to a Mexican restaurant, I often order burritos so this is intriguing that I pin enchilada related things. I do love anything in the Mexican/tex-mex genre. On a side note: I have NOT pinned the four billion versions of adding things to guacamole. Why mess with something that is pretty much perfect? Corn and goat cheese in my guac? No, thanks. But I digress.

I have pinned frozen desserts that don't require an ice cream maker. Granted I've at least chosen two different flavors but I see a pattern again. Few ingredients and a pan in the freezer. I'm looking for the easy dessert fix apparently.

Overnight French Toast is another biggie with me I hadn't realized. Not sure I'm a fan of french toast to the point of obsession and repeated pinning, but I think the truth is, I love the idea of breakfast just being there when I get up on weekends. So the idea of french toast in a crock pot that would be all gooey and ready is appealing. I tried a breakfast egg casserole in the crock pot a few months ago for dinner. Turns out my crock pot here in Spain cooks super hot and scorched the heck out of those eggs in about 6 hours instead of 8. So much for the overnight idea. Scorched french toast just isn't as appealing, nor is getting up at, say, 3 am to turn it on so it's not scorched by morning. This is probably not going to happen. Ever. Thanks goodness for my significant other making muffins, smoothies and such! whew.

A lot of my recipe pins are crock pot ones, as I'm apparently on the trail of homemade food that I don't have to spend much time making happen. I want to eat well I just don't want to participate much. It's another pattern I didn't know was there.

The one trait I'm a bit horrified to admit that the pattern shows is I want it easy and effortless. I wish I was one of those people that enjoys the process and the art. That would seem more noble. I just like to eat yummy-ness but prefer minimal effort which doesn't always go together I find.

I wonder if everyone could go to wherever they hoard recipes and find a pattern? Do you have any food obsessions that you KNOW about or will it come out in some public forum someday? 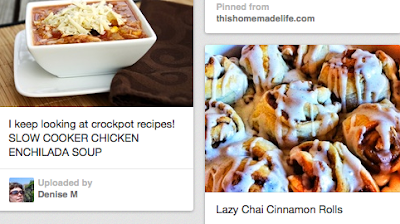 Posted by roamingwriter at 10:03 AM