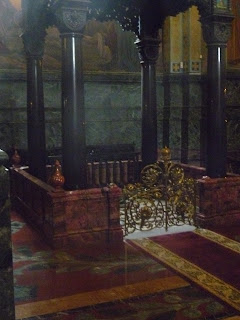 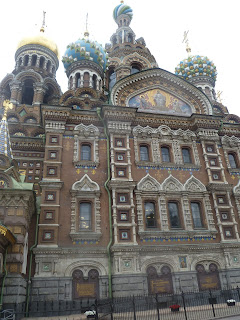 Day two we were not late so no debasing treatment from the tour guide. St. Petersburg, Russia here we come.

First the subway ride in the brand new Admiralty stop. The first escalator is about 10 stories continual escalator. Crazy. The trains are old  and beat up looking but the stations are new. I think the Kiev, Ukraine station I was in last year was more impressive and older but they really work to make the stations impressive and regal. No graffiti like I'm used to in Spain.

Quickly back to the tour bus and the early entry of the Hermitage. Biggest museum in Europe (quantity - wise) only 7% is on display. It is housed in three palaces at least the display part. The palaces themselves are worth a visit even without the art. The impressionist exhibit was very nice. Some Van Gogh I wasn't familiar with and Cezanne as well as a lot of names I recognized. Some early pieces of Monet that were darker palettes before he moved on to lighter colors and light play were an interesting contrast to other paintings I'd seen in other countries. Rembrandt section is the largest in the world and super crowded. Ridiculous. We saw the prodigal son which had been used for a sermon in Spanish church and I really liked seeing it live. It was quite large.

It was really worth it to have a guide for the Hermitage both for the early entry they get and for guiding you to see specific things. The place was enormous and you could spend and entire day wandering and not see what you were looking for.

One thing that made me pay attention was that Oksana our guide would describe the people who had collected say the impressionist paintings and then at the end say:  and it was confiscated by the Communist government where normally you hear it was donated to the museum. Then in the tour they would have the biggest of say the Rembrandts in the world, the european silver collection biggest in the world. If the government simply confiscated everyone's everything from all the rich people in such a huge country and put it in the museum seems it would be an easy way to get the biggst collections of a lot of things.

We walked thru the grand and large Revolutionary square. You could see St Isaac's golden basilica in the distance. 4th largest in the world  or Europe or something (or maybe a lot of place I've been claim to be in the top five??) She mentioned four including this one and  Brussels, Milan and Rome.


We visited the church of the spilled blood. Most mosaics in the world. 7000 inside one church if I'm remembering right. I thought it would be the spilled blood of Christ, but it was where Emperor Alexander II was killed. There was a second (at least) attempt on his life with a bomb. It harmed some people and not him and he felt it was his duty to get out and attend to the people. So the conspirators threw another bomb and got him and so they built a church literally on the spot - they moved the bank of the river and kept the pavement and the railing wheere he was killed inside the church they built. He had freed all the serfs from the feudal system/slave system still going on but did not give them the land they lived on. The church was colorful inside and out. Russiana Orthodox so no pews.


A quick walk down a shopping district (not to shop to show us -- a blog on tours later) We got out no money the whole time. They just marched us around very quickly and stopped us at particular shops.

Then a dramatically quick stop at the Peter Paul Fortress to the St.Peter St. Paul church, orthodox russian where all the Csars are buried including the last one and his assascinated 5 children -- they did NOT receive the royal crest on their tombs. They were found in a mine shaft where their bodies had been thrown  80 years later or something like that and dna tests verified them. Oksana was adamant that none survived that it was legend from books.

Nothing was leisurely but we did see a lot in a very short time.
Posted by roamingwriter at 3:08 PM