Adventures on the road

Honestly, when I knew I was spending 11 days continuously with everyone I work with I was nervous. That's a long time to be cooped up with co-workers, whatever the belief system you all share. I was pleasantly surprised that there weren't major incidents and only minor irritations that were swallowed without much extra water. Getting to drive our own car was a blessing. We could control our own environment and could run to the store or bank without depending on someone else to take us. More stressful for Dar since he did most of the driving, but I think we trusted his driving more than anyone else's anyway. We missed one turn-off for a different highway because Dar, wisely, didn't cut in front of a semi and follow the lead car (a la Italian job and the subway train). One turn off missed in 3700 kilometers, not too bad. We doubled back within 5 minutes or so.

A part of France looked exactly like Florida. The part that has the huge pine trees and the sandy soil. Even some of the houses looked Floridian. It was very interesting and we weren't the only ones who noticed it. That was near the coast.

Dar has blogged about the actual work. It was terrific to be part of what we worked so long and hard to be here for. So much of life is mundane office work, the production days are really rewarding, if somewhat exhausting.

In Holland, they have special roads for bicycles with their own street lights in some cases. Everyone rides bikes, old grannies in skirts, young girls on cellphones, guys smoking cigarettes, you name it. The bikes have a very tall profile. I noticed hardly anyone had a bike that they had to lean into the handle bars.

One of our young associates kept bugging me that we should go ride bikes. I don't know why but it was somehow up to me to organize it. I wanted to do it too, so finally the last few days I talked to the hotel about bikes. For E5.70 you could have a bike for the DAY, and it took a day's notice to get them so we were down to bicycling our last night in Holland. We worked all day, packed the equipment for the trip and manged to get out of the Bible Museum at a reasonable time and took to our bikes. One guy who came in from the states, the young associate, a 13 year old nephew of someone in the group, a summer college intern, and me!

The bikes in Holland are tall. Even with the seat all the way down I had to leap on and off, like riding a neighbor friend's bike when you were a kid. The handlebars are higher up and so if you were taller than me there would be little or no leaning involved. Being shorter, I had to lean a little but less than my normal bike. They also had very hard seats, I'll let you take what you will from that.

The little roads made riding a breeze, smooth, flat. We got off those and rode along a cannal for a little while. We saw sheep and hot air balloons. It was really a wonderful final night in Holland. We were about 50 yards from the hotel and somehow in that short distance we lost the intern. She's very young for her years and naive. We'd just passed a strip club (that sort of thing is common and legal in Holland) and I was worried she was being kidnapped and sold into the black market. Okay, I wasn't sure that was what happened but didn't feel like I could turn in for the night until we found her. We split up and went up all the side streets looking for her. As the only official "missionary" in the group I felt responsible for losing the intern. She turned up and a couple of us were a little harsh telling her she had to let people know where she was when she's in a foreign country, it's a safety issue. She'd been making a flower necklace in a church yard. It was 10 pm and still twilight, but we called it a night. Two days of driving were ahead. 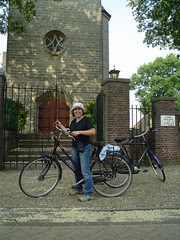 Posted by roamingwriter at 6:34 AM